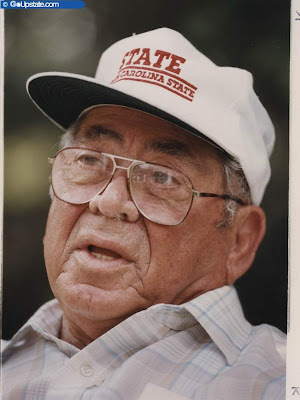 Longtime educator R.P. Dawkins of Spartanburg passed away last week at age 98. Originally from Union County, his prominence in the Spartanburg community through the turbulent times of the last century earned him the honor of having R.P. Dawkins Middle School named for him. But as Kevin Alexander Gray reflects in a fine remembrance, Dawkins's greatest legacy is seen in the generations of children he taught and led.

It is true of all teachers that they build palaces out of minds, one lesson at a time. Gray, a Columbia-based author and activist, demonstrates that Dawkins leaves behind a city of such construction.

When one considers the history of Spartanburg County, Dawkins, who began his career as an educator in 1939, guiding three or more generations of black kids through Jim Crow and “agricultural training” to “separate but equal” to “choice, not chance” to court-ordered desegregation, is a real unsung hero.

He was beloved by thousands. Especially those of us now in our 50s, 60s and 70s who were Lincoln High School “Bearcats” during the days of racial segregation in the public schools. Lincoln was our safe harbor. Teachers lived in the neighborhoods among the kids they taught and had a huge place in community leadership.
...
I'm sure many, like me, remember sitting outside Fessor Dawkins' office. The wait wasn't about fear or making you sweat it out, although fear and sweat were often evident. Fess wasn't a mean man. What you feared the most was losing his respect and confidence. So you had to get your story right. You had to go in and tell him what you had done. Sometimes you might have a note from the teacher. On occasion, the teacher might personally march you to the office. Maybe a witness or two if you were fighting. But most often you went into his office alone and you had to tell him why you were there.

Fess always gave you a choice.

“The best possible outcome,” said Curtis Nash, one of Dawkins' many students, “was that Fess would tell you to take a walk with him. Then as you'd walk down the hall he'd put his arm around your shoulder and say, ‘Let me explain something to you … .' "
...
There are very few of those educators still alive from the era of the “consolidated” all-black school where a student would attend from the first grade to the 12th. Schools like Carver, Mays, New Bethel and Foster's Grove in Spartanburg County, Sterling and Bryson over in Greenville, and Booker T. Washington and C.A. Johnson in Columbia, just to name a few, were the heartbeat of a segregated black community. They were led by the likes of C.C. Woodson, Leonard Patton, Stonewall Richburg, H.B. Rutherford, Maceo Anderson and many others.

And when segregation by law ended, it was Dawkins, along with my parents, who made the call that my sister and I leave Lincoln to go over to then all-white Fairforest Elementary in 1969. And when desegregation took full effect, for many of those black principals, it became their job to transition kids to a new environment, where they were denied the opportunity to serve as principals at the newly integrated schools.

Living to be 98, R.P. Dawkins did and saw more than most. He was a living piece of history when he was among us. Now his life's tale and those of many others like him deserve to be recorded in our history books.

In a separate item on Dawkins's passing, the Spartanburg Herald-Journal last week spoke with others of Dawkins's students and colleagues for similar reflections.

In June 1995, the original R.P. Dawkins Middle was closed, and the school was moved to the building that once housed Blackstock Elementary. The building now in use was renovated, with the addition of an eighth grade and fine arts wing. The school opened at its present location in 1995.

“It was a foregone conclusion that the new location would retain the name R.P. Dawkins Middle School,” said David Eubanks, then-superintendent of District 6. “There was never any consideration for it not to be. But he was so humble about it. He was one of those guys that if it did or it didn't, he wouldn't have complained about it.”

Though Dawkins was already retired when Eubanks, who retired in 2002, served as superintendent, Dawkins remained a fixture at the school named after him, attending awards days and donating money to the school. Sometimes he stopped by Eubanks' office to give him an encouraging word.

“Mr. Dawkins was an encourager,” Eubanks said. “He had a great manner about him with people. He was one of those guys who quietly did an awful lot for a lot of people. I've kept up with him over the years and I'm saddened to hear of his passing. He leaves a legacy that will be unmatched.”

Dawkins and his wife continued to give after they retired as educators, said Donna Mayes, who remembers Dawkins as her principal and attended Forest Chapel CME Church with him. They donated scholarship funds to the Spartanburg County Foundation for Dorman High School students who attended

“He didn't have children of his own,” Mayes said. “But yet, he had more children than anyone could imagine.”
...
As her principal, Mayes, now an English teacher at Dorman High, remembers Dawkins as strict.

“But he wanted us to excel,” she said. “He wanted the children to get a good education. We were expected to learn. That's what he cared so much about. Do your best — he was always so encouraging.”

Dawkins helped the school district through integration, smoothing the rough edges, as Mayes puts it, of blacks and whites attending school together in Spartanburg County for the first time.

“He made things good for us,” Mayes said. “He did everything he could for all of us. I appreciate the opportunity I had for him to touch my life. My heart is just broken — he was just a father figure to so many people.”

On a day when America honors a man who taught the nation by his example, it's fitting to remember the teachers in our own communities who do the same, day after day.

God bless and protect our teachers in South Carolina.

Is something happening in your school, school district or county that should be shared with educators across South Carolina? Is your local media covering, or not covering, an important issue? Email your notes to EducatingSouthCarolina at gmail dot com.

"I have an exalted idea of the importance of your profession. ... You fashion the thinking of the children of our State. You influence their lives. I believe you have at heart the future of your pupils, as well as your own future."
Governor James F. Byrnes,
March 16, 1951